Codenames is a popular card game designed by Vlaada Chvátil published in 2015. To play this game, each turn a clue giver in each of the two competing teams announces a one-word clue and a number indicating how many words on the table are related to this clue and the guesser(s) have to guess as many words that belong to their team as possible. About 8 of the 25 words on the table belong to each of the teams. The rest of the words are neutral but guessing the black assassin loses the game. Only the clue givers know which words belong to which team. The team who has all their words guessed wins the game.

The following pictures show a game in progress where all the guessed words are covered by the team’s color (beige is neutral). The color key at the bottom is only shown to the clue givers. 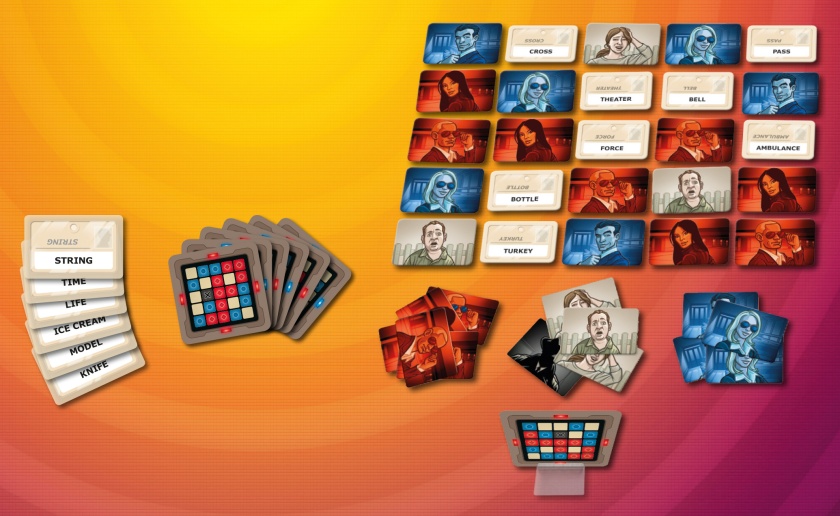 The guessers guess the words in sequence, up to one more than the number specified by the clue giver. For each guess, the guessers need to find the word that has the highest probability of belonging to their team. For each candidate word, this probability is calculated as follows, using the Bayes formula.

Since each word is randomly assigned to each team, the quantity

is the same for every word. Additionally, the denominator P(Clue) is fixed for any given clue. Therefore we can simplify the equation as:

That is, given a clue, the probability that a word belongs to the guessers’ team is proportional to the probability that this clue is used given this word needs to be guessed. The left side is what we need, but is extremely hard to calculate given the strategies of the game. The right side is more straightforward. Often, the guessers have to consider the few target words for this turn as a whole set and plug into the formula.