There has been many attempts to improve the QWERTY keyboard layout. Dvorak maximizes hand alternation; Colemak and many others emphasize on easiness to switch from QWERTY; Workman improves on these by considering the effort of lateral movements and the interaction between finger and row; Q*MLW* layouts provide the optimal solution of a quantitative effort model but fails to consider the factors raised in Workman. I generally agree with Workman’s finger strain mapping.

To design the most ergonomic keyboard layout, all of the advantages of the existing layouts are considered. The ThinQu layout has the following features in common with its predecessors:

The ThinQu layout shines with the following added advantages:

The non-shift version is made for split keyboards and ergonomic keyboards like Kinesis in which the keys on one side cannot be assigned to the other side. The eight base keys are at the same locations as other keyboards. The keys in the middle column of the standard version are moved to the right end.

The programming version is suitable for those who spend most of their typing time writing computer programs. In optimizing the layout of symbol keys, learnability is more emphasized than that of letters since some users may switch back and forth to the standard ThinQu. As a consequence, most of the symbols on the numbers row remain in the same place. Shift state symbols and normal state symbols mostly move together (e.g. apostrophe and quotation mark). For letters, only J and q  have changed place. The in key disappears. Symbols in the top row are directly entered whereas numbers are entered using Shift (except 0).

Windows XP or above

Instructions: unzip and double click setup.exe to install. It will show up as United States – International Keyboard – Custom. If not, restarting the system will solve the issue. You may change the region by editing the source file and rebuilding the installer yourself. 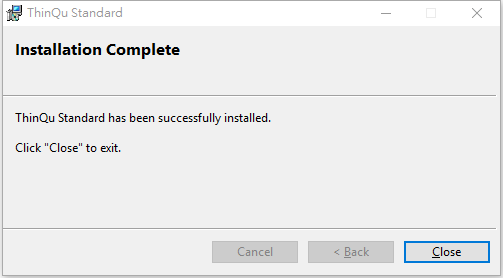 To uninstall, double-click setup.exe and select “Remove the keyboard layout.” You can also deactivate it through Windows settings.

To edit the keyboard layout yourself, download and unzip and open the source file using Microsoft Keyboard Layout Creator 1.4. It’s recommended that the installation directory contains no space to prevent a possible error. Uninstall your current ThinQu layout and create an installer for your edited layout by selecting Project > Build DLL and Setup Package.

Due to the constraints of the editor, you may not assign to Capslock state keys that are different from the default state and Shift state. There are certain unassignable keys including Ctrl, Shift, Enter, and Backspace.

I found a bug, what should I do?
You should send a bug report using this form.

Are the other versions of ThinQu available for Mac?
No. You can contact me to share the installer if you made one.

Do gaming keys stay the same?
No. In most PC games, the default keys for moving and attacking are at the new ThinQu locations. To use the original key configurations, either use QWERTY or customize the keys under the game’s settings.

What corpus did you use to calculate letter and bigram frequencies?
I used the results analyzed by Peter Norvig, who used Google Books Ngrams data and counted approximately 3500 billion letters. For punctuation mark frequencies, I used a couple of different resources but none of which is very accurate. For computer languages character frequencies, I mainly used the analysis by Xah Lee, who counted 14 million punctuation characters.

How did you decide where to put each letter?
Please read my other article The Development of the ThinQu Keyboard Layout: Factors that Influence Typing Effort.

How many hours of loss in typing speed should I expect before it catches my QWERTY typing speed?
There is no scientific data of this sort that I’m aware of. From several people’s account of learning Dvorak, I estimate the loss to be 30 hours, spreaded out over eight weeks but mainly in the first two weeks. Note that this does not account for the increased cognitive effort in coordinating finger movement, which could be an even higher cost than the loss in typing speed.

What’s the condition that makes switching to ThinQu beneficial?
Since the cost of learning a new layout is much shorter than the period afterwards, we can model it as a one-time investment followed by a constant flow of benefit. The condition is:

where initial costs consist of loss in typing speed and increase in cognitive effort measured in hours lost; r is the real annual interest rate; T is the expected number of years you will be using the ThinQu layout; C is given by:

Increase and decrease in productivity can be difficult to measure. Incompatibility arises when you are forced to type using a different layout. Risk and uncertainty is expressed in proportion of benefit lost and includes mortality, technological progression, appearance of better layouts and keyboards, giving up, and other factors. Visit here for more information about the formula.

What tips do you have for typing with ThinQu?
If you are using the standard or programming ThinQu layout, it may be more convenient to press Alt Gr with your right thumb for some keyboards.

F + in or in + F is the most common sequence that requires a finger to move two rows (accounts for 0.08% of all bigrams). You may split the in and type I + N to eliminate this movement.

If you usually type thoughtful texts, when you start learning ThinQu you can set aside one hour each day just to practice typing. This way when you type at work you are not terribly slow that it interferes your thoughts.

Why is the work relatively balanced between the two hands when most people are right-handed?
The factors that further increase the usage of the right hand include: (1) the usage of Enter and Backspace, which are sometimes used more often than a third of the letters, (2) the usage of navigation keys and the numeric keypad, (3) the usage of mouse and the hand movement between the main keys and the mouse and other keys. One opposing factor that decreases the burden of the right hand is that it involves less hand movement than the left hand: 66.1% of the right hand usage is in the four base keys compared to 50.2% for the left hand. You can assign the thumb of your less loaded hand to the Space key (and leave the other thumb idle) to further balance the two hands. Some right-handed people also report that they prefer to use both hands equally. In conclusion, the effort may be slighted biased towards the right hand but varies a lot depending on the situation; this can be personalized by assigning Space to the stronger hand’s thumb.